I know 1991 stuff doesn’t seem to get as much of a response when I post it as 94-95 jungle does, but here’s a ravey 91 monster which is pretty undeniable in my opinion. “Make Some Noise” is on the 786 label (side label to Deja Vu, or was it the other way around?), and produced by David Hope aka Recall. Hope was also a member of Mind Of Kane, who did the similarly-massive tune “Stabbed in the Back”. As with that tune, this is a pretty straightforward, all-business hardcore track: heavy breakbeats, an absolutely huge rave synth (deftly reworked from T99’s “Anasthasia”, using both a cut of the synth stab and the full original riff), an occasional vocal sample repeating the track’s title, and not much else. It’s also quite easy + cheap to track down, making it a no-brainer purchase for fans of early rave/hardcore stuff. 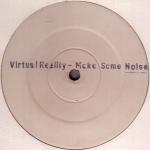