[it] came out early 00’s. I bought a copy myself in the local drum & bass/ garage shop.
I asked esp clarke-e but he said it wasn’t by him.

Since I’ve been terrible about posting tunes on this site for a while, here’s a really obscure recent find which I haven’t seen any mention of before. Because it’s so obscure, I’d have been happy to keep this to myself for a while, and in fact I’ve played it two shows in a row on BTTO Radio without ID’ing it (to be fair though, nobody asked for an ID either). But it’s probably best to share what I know / some clips, and see if anyone knows the full story.

The EP in question is pretty sampletastic 92-93 sounding stuff, untitled with no artist info at all -just a manufacturing/production company stamp on it. The tunes vary pretty heavily, not impossibly so but definitely on the edge for what might have happened on a legit old release. The A side is a nice dark 92-93 track, with a number of change ups. The B side starts with a more moody 92 whitelabel style track, then features a more classic pitched up female vocal 92 tune.

Despite being pretty convincingly\ “of the time” production-wise, there’s a number of things which make me think this may have not been written back in 92-94, but at some point later. The biggest tip-off is the phone number on the stamp – this number has an 020 prefix, which means it’s post-“Big Number Change”. Phone numbers in the UK only started having the 0 prefix after 1999 (97/98 for Mobile). So the only way this could be from 92-94 would be if these stamps were done far after the label’s release, which is unlikely as the name of the company matches the catalog # prefix etched into the record – AM / Alliance Multimedia. The only other possibility for these being old tunes is that they were finally pressed up at some point later, years after being written. Again, seems a bit of a long chance. In addition to the phone number, the samples seem quite sampleadelic / referencing other oldskool tracks, but not in an “of the era” 92 mashup manner (ala “Energizer”. Instead, the samples cover a significant year range. On one hand, you have a classic scratching bit which I believe is from a Hijack tune, and was also used in an early Parliament Recordings release amongst others. But then you also have the “Everyone wan go heaven…. nobody wan dead” as used in later dark jungle tunes. Finally, the length of the vocal sample in the b2 tune makes it sound as if it was done on later era gear, or maybe even on a PC – most artists were pretty short on sample time back then!

Again though, this is just total speculation on my part. Sadly, there’s no other info to offer, other than the fact that I’ve seen more copies for sale from Germany than the UK. This would make me think it’s from there but, again, UK stamp on the record, so probably just a coincidence.

Finally, one more confusing factor is that, till today, the discogs entry for this was totally wrong, mirroring info for an unrelated UKG release. It’s an easy misunderstanding, as the guy who added those Artist / track names, owned a copy of this EP which happened to have a one-sheet for that UKG release stuck in with it, and the number of tracks matched up perfectly. Also, it looks like the company that pressed this did a fair bit of UKG stuff too, so who knows – maybe this was a random small project around the time of those UKG releases 99-01?

Regardless, here’s the A side in full, as well as clips of all the tracks. Someone fill us in if you have any more info! 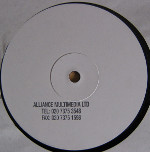