Hey all, been a while since I’ve posted anything about the Dreadkiller EP. I’ve got some good news and bad news.
The good news is: the test presses arrived, and are sounding nice: 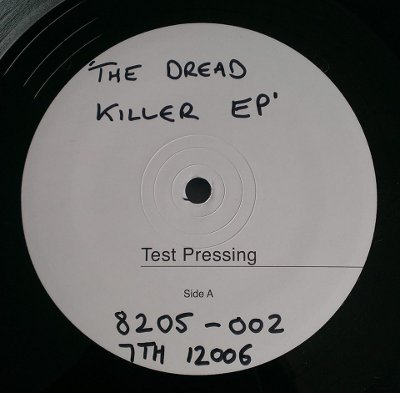 Good quality tunes, big solid bass. The two bonus testpress copies have already gone out to the winners of the competition (Phil/DJ Extreme and Ben/Onken). We went ahead and approved the TP 8 days ago.

Unfortunately, the timelines for pressing plants continue to get crazier and crazier. When I first put together this release, we were quoted as 4 weeks for pressing once the TP was approved. I just found out that that has since gone to 8 weeks, since an anticipated drop off in order volume didn’t pan out and, if anything, MORE orders have been coming through. Plus, there was an extra week or two before we received the test press, though we approved and got it back as quickly as possible (over 2-3 days). These delays are unfortunately becoming a hugely common problem with the big plants now, since it’s not like they can simply order more pressing machinery to expand to handle the extra orders (record presses probably haven’t been manufactured in 30+ years).

The short of it is – The EP definitely won’t be ready end of November. I’m hoping it will be ready end of December now (in time for xmas), but it might be as late as first few weeks of January. Especially due to postal craziness around Xmas time, it’s just not clear.

Even though this is becoming an almost unavoidable occurrence these days when dealing with a lot of the big pressing plants out there, it still sucks and we’re not happy about it (I’m guessing all of you who preordered aren’t too pleased either!). With that in mind, I’m discussing with Simon regarding possible further preorder bonuses and incentives we CAN get out to everyone who already placed their order. Just to tide people over till the real release. We will keep everyone updated about that for sure, but in the meantime hold tight and at least know the record is off at the plant, tp has been approved, and it is in line for pressing.