Here’s a fun Bogwoppa related track with an especially LOL-tastic intro swiped from the Monty Python album… for those who haven’t seen the other tracks I’ve posted by Secret Squirrel and assorted aliases, they’re actually by Julian Cobb aka hardcore don Hellfish. This release is in-line with a lot of the other Bogwoppa/Dance Bass releases in that (as the intro shows) it doesn’t take itself too seriously, but still has some pretty mean rave-age contained within: fairly heavy breaks, ragga vocals, aforementioned Monty Python samples, a synth breakdown which appears to be a bit of Duran Duran chopped to bits. The quality of this rip is a bit rough since my vinyl is a bit worn out, but in general the tunes on this record sound about on par with other Bogwoppa/Dance Bass stuff – pretty gritty and amiga-tastic, but definitely playable and capable of dancefloor damage. Pretty great examples of crazy sampletastic frantic hardcore in the 92/93 era.

This “Jungle Squirrel” remix is perhaps a bit more of a track for DJ’ing but there’s still some nice change-ups throughout. The other tracks on this EP also decent, solid remixes of Come Rudebwoy, Fresh Vegetable ahd E-Drop, 3 of the better known Secret Squirrel tunes. 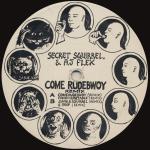 
I was reminded of this tune because it’s at the very beginning of one of my favorite mixes, the Panacea – Big Bad Head mix… that Monty Python intro is the perfect lead-in for 60+ minutes of craziness in that thing. Definitely one to grab if you ever want to bike / run / otherwise exert serious energy for an hour or so!