Since Tim’s going to have the 95/96 stuff covered nicely for a bit, here’s another 92 white label ripper… this time more of an in-demand one which has always been a bit pricey/hard to nab, though I was finally able to score it earlier this year on-the-reasonable. Detromental did a number of other whitelabels which were more housey/techno-y, this was the last and still has classic 91-leading-into-92 grimey production but with slightly higher bpm and more frantic breakbeats and synthwork. As with the last track posted (PHP – Iree) there’s some ragga bits in here, though in this case it’s ragga vocals battling some decidedly NOT dubwise synths of the nasty rave variety. Big bad stuff in my opinionn! 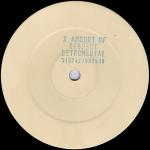