Here’s the first record on the ragga jungle label Slam! records. It’s no secret that as pricey as some oldskool jungle is, if you chuck some some toasting samples on top and make sure the track has amens in it, a bunch of north american kidds in camo pants will materialize out of nowhere and just start throwing money at you. This one isn’t easy to find but is actually one of the less rare releaseson the label, where the rarest stuff seems to be the Dread and the Bald Head releases which I see regularly posted around (but rarely for sale). I actually posted one of their tunes here, albeit in shortened form on some ragga jungle comp I got for a couple euros in Scotland. Regardless, I really like this tune – frantic breaks, solid toasting, and a sick synth breakdown swiped from Wax doctor & Jack Smooth – Unfriendly. Not too many elements, but more than enough for a good 94 track. The artist behind it, Andy Tully, also did some nice records in I Spy and Groove AS You Move…. still looking for the second and third I Spy records if anyone has doubles! 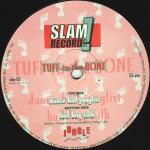 Tuff to the Bone – Dancehall Junglist

One Reply to “Tuff to the Bone – Dancehall Junglist”