Here’s a fun track for Friday.. guessing the only reason this wasn’t bigger back when released was that it came out in 94 but sounds very much 92 style… not just the uplifting pianos (which contrast nicely with the Cape Fear soundtrack music sample), but the low fi hiphop vocals bits, etc. In fact, it pretty much sounds like it could have come out of the exact same sessions as NRG classics like “Never Lost His Hardcore” or “Feel the Fury”. Not sure if that’s the case or not, but either way, I don’t think it ever got proper UK release and instead came out in a German label in a couple of different pressings. Definitely a fun grab if you’ve got the other NRG stuff (which most 92 fans do) but are looking for something less known with a similar fun sound. 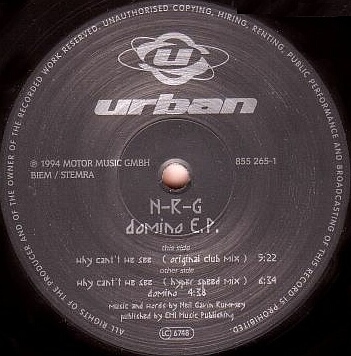 One Reply to “NRG – Domino”