Here’s a personal favorite I’ve had for ages and ages, to the point I can’t even remember when and where I got it! I do remember it was in my first ever oldskool mix I recorded (alongside hyper-on, that cymbols of raveology tune and plenty of other stuff I’ve written about on this site) many many years ago – back when I was collecting but didn’t even have a proper DJ setup. It’s got a nice mixture of heavy amens ala most Brain Records stuff of the time, some unsettling and harsher sounds (machine buzzes, timestretched sounds which end up sounding pretty alien and dissonant), and a frantic “Come On!” sample chant taken frmo the end of that famous Public Enemy sample “…and you thought the beat slowed down….c’mon!!”. Along side these, there’s also some big breakdowns and dramatic pauses that give you a break right when you start to need one. In particular, the melodic breakdown towards the end with a vocal bit from Satoshi Tomiie – “Tears” (really nice use here) works well and adds more depth to the track. Considering those and some of the dramatic empty breakdowns, this tune almost starts to remind me a bit of some of Cool Hand Flex’s best productions of that era, though it still clearly has Brain Records Studio / Bizzy’s production style all over it. I dunno, am I crazy thinking that?? Regardless, big respect to Ben/Zinc and Swift on this one! Worth nabbing even if it ends up costing a bit more than your average new record. 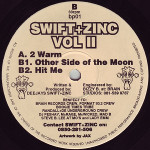 Swift & Zinc – Other Side of the Moon