I’ve posted plenty of stuff by DJ Massive before, both the DJ Massive C one (aka Alan from Elementz of Noize) and Roy Lasprilla. Not 100% sure which one did this. UPDATE: Roy Lasprilla has confirmed he did it. Either way, this is another quality EP under that name, this time in a 1995 ragga jungle style and on Conqueror (best known for their Lemon D and Dillinja releases). There’s nothing shocking in play here, just a wicked steppy intro (great for mixing) coupled with ragga vocals, dropping into a well engineered amen and weighty bass. The production is a bit harsh for a 95 tune, sounds a bit more 94 than 95 to me…. but since I love both 94 and 95, that’s definitely not a bad thing. Not as cheap as other stuff posted here but still more of a moderate priced tune these days than some 80 pound Jet Star or Slam! release. Definitely worth checking out, as are the rest of the “Dance Hall Massive” EPs 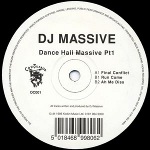 (removed as for sale on another site now)