It’s kind of dreary day today here, so here’s a tune to match…. as played in Sunday’s 94-95 radio show, it’s a 94 deep and dreary track by Mystical. I’ve got no idea who Mystical was. but I’ve got a bunch of records by him on Stooge Productions, so I assume he was an associate of DJ Stooge’s. As mentioned on discogs, the matrix #s on this record indicates that this might have been meant to be the 15th release on Stooge as well.

For me, this tune is all about the breaks and massive sub – there’s a few other samples thrown in (some ragga vocals, a dreary synth and “try so hard” vocal line), but in my opinion this tune is at its best when it’s just got the huge boomy sub and multiple layers of breaks (cold sweat plus some others) firing away. Pure 94 moodyness!! It’s also quite short for a jungle track at just under 4 minutes – so short, I accidentally let it play out to the end of the tune on Sunday, and had to rush and start the the next track without cueing. However, that makes it great for posting here since it’s a nice and to-the-point listen, and once you remember the fact that it’s short, it’s easy to mix and out of (just don’t blend slowly in for 2-3 minutes). On top of all that, it’s a nice and cheap tune to pick up, perhaps because the A side isn’t very strong in my opinion. Definitely one to nab if you like your 94 jungle dark n moody. 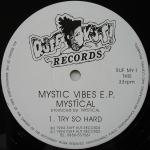 One Reply to “Mystical – Try So Hard”