A recent thread on B2VOS got me thinking about US produced tracks again – here’s one I like a lot, which is much better produced than the last EP I posted. This one is by a crew out of New York called Digital Konfusion, who I think primarily consisted of I-Cue and Peppersteak. I-Cue was a heavy hitter in New York at the time, and still DJ’s to this day. His crew + Liquid Sky / Jungle Sky seemed to heavily focus on the intersection of jungle, trip hop and hiphop, a quite popular combination at the time which helped a lot of US kids get into and “understand” jungle. There’s none of that in this particular mix though, just mashed amen badness through and through.

No date on the release, but it sounds 94-96 era? “Kill Dem Dead” is a nice amen tune featuring classic Cutty Ranks vocals, pitch shifted / time stretched breaks, frantic scratching etc. The breakwork is definitely well sequenced but it gets a little bit repetitive later on in the track, and the record isn’t pressed quite as loud as similar UK records. Otherwise, it’s a a wicked tune in my opinion… watch for the bonus vocal sillyness at the end 🙂

Not much info on this label, other than they did a similar jungle remix EP for Makeda’s dancehall resinging of Mary J Blige’s “Real Love”. Definitely a nice cheap EP for fans of 94-95 amen obscurities. 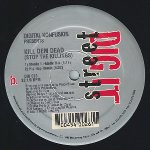