Here’s the extremely difficult to listen to track I mentioned recently… ASC’s “Dreadlox” on Bass Sphere. To be clear, this record is NOT by the leftfield + atmo dnb producer of the same name, though I know that producer was into oldskool back in these times.. rather, I think this EP was done as a one-off by a producer who has gone on to do more dancehall/reggae/dub stuff. 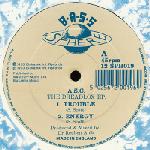 “Dreadlox” is a combination of 92 style ragga hardcore elements: dancehall vocals mixed with rave stabs, diva vocal chops, etc. The sample choices themselves are fine, what makes this such a challenging listen is the absolutely BRUTAL timing of the samples,

Before getting into that, I should point out that tempo syncing wasn’t as easy in the early 90’s as software like Ableton or Logic makes it now. These days you can get a visual representation of a sample and individually drag tempo markers around, even fixing individual hits of a breakbeat without having to chop it up. Back in the early 90’s though, I think people usually had to pick between a few options:

Sometimes you can tell where producers may have opted for the 3rd option and/or not chopped the sample quite right, since there’s little imperfections in the loops. Either there’s a brief pause at the end of a sample, or it repeats slightly before the end of the measure. Most of the time though this is barely noticeable, and even when slightly noticeable it can (for me at least) be one of the charming aspects of hardcore… reinforcing the rough-and-tumble nature of the tunes which are more based on trying stuff out than trying to get crystal clear perfect production quality.

That being said, this EP takes these sort of tempo idiosyncrasies and pushes them to an extreme, more so than any other hardcore EP I’ve heard… this tune in particular. It starts out with a good opening ragga sample, but six seconds in you can already tell something is a bit off. Maybe it’s the unquantized melody, but something doesn’t sit right… This sort of tension continues through the track until 2:26, at which point everything goes haywire. Two breaks (Sesame Street and Funky Drummer) come in and, despite apparently repeating at the designated measure boundaries, sound completely out of time with each other. It’s almost as if you took one of the dodgiest trainwrecks from my radio show (of which there’s many to choose from) and recorded it to vinyl!

This timing chaos is pushed even further when the classic “Sweet Sensation” vocal stab comes in on top, making it sound like *3* separate tunes are now playing all at once, slightly out of time with each other. At this point the tune starts to sound less like a rave track to me and more like an experimental music piece, perhaps done as an examination of the “human”-ness of classic hardcore/jungle/rave, trying to magnify its idiosyncrasies to an (il)logical extreme. It’s fascinatingly tough for me to listen to, and this is coming from someone who has spent years listening to and producing all sorts of music which sounds like chaotic nonsense to most people.

To be clear, no disrespect intended to the artist – it seems like he’s done well received dancehall and reggae records since then, and if anything this shows how there really were no rules for this sort of stuff early on. I just find it interesting and, frankly, have more of a response hearing things totally fall apart in this tune than I do for a more in-tune but nondescript ragga hardcore whitelabel tune. I’ll try to post another tune ASAP which I like for slightly more positive reasons.