As for this tune/remix, it might not sound all THAT crazy, but it is quite an effective little 92 hardcore number. The staccato lead is a bit reminiscent of “Living in Darkness”, while the string breakdown adds a bit of weight to the track (and tugs the heart strings a bit), giving a bit of basement / proto-intelligence seriousness to it. Not exactly a dark tune but quite far from the pianos and chipmunked vocals in some other tunes of the time. It’s also a bit underrated, certainly not pricey or hard to find. 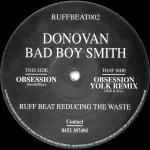