It’s been quite a while since I posted a 1991 tune, I might need to make that up with a few posts of heavy early tracks. This one is a personal favorite which I finally tracked down as part of a 10″ doublepack reissue from 1994. The reissue contains the original 1991 EP on one plate, plus 2 new 94 remixes on the other. Even though the remixes are good, the originals still do it for me… just so many excellent samples in those versions, all working together nicely! As an added bonus, on the repress version at least (not sure if the original is pressed at 33 of 45), you can easily play it at 45rpm and mix it with 94 jungle stuff.

As with a lot of the later stuff on Mendoza, this EP a bit pricey and hard to find, but “Both Ends” is definitely one to keep an eye out for, either in original form or as part of the remix EP. 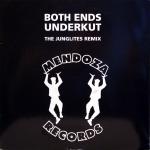