Damn, back to slacking with the tune posts…. here’s an odd obscure-for-the-sake-of tune to make up for it. No idea about this one, other than I’d never seen it before so took a chance on it. It’s supposedly a US record (according to Discogs), though I don’t remember whether there was any indication about that on the record or if someone just made a guess when listing it on discogs. Music-wise, It’s a sampleadelic hodgepodge of various riffs, acid squelches, questionable vocals, etc; total “Throw the whole plate at the wall and see what sticks’ style. Also, the first sample in the tune sounds like the intro of the Liquid Aliens EP, might be the same source sample? Not sure what else to add really, it’s just an odd, fun tune that I doubt other people have heard, so give it a listen. 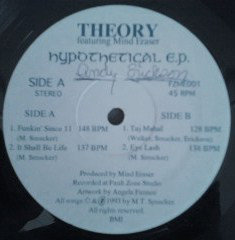