Here’s a fun 92 tune I’ve been waiting to play in a mix, but since there hasn’t been a good opportunity and no tracks have been posted in a while, I’ll force myself to post it up in full.

I first came across this tune in a mix by the brilliant Chris DJ Sav (RIP). A lot of Chris’ later mixes focused in on super oddball, off kilter tunes with a strong “so wrong it’s right” feel (eg my personal favorite stuff). Plutone’s tunes highlights this well. Despite being released on some slightly more established labels, and seeming to be a relatively big german techno/rave act (I think they were on a big loveparade comp if my memory serves me right), a number of their tunes were super mental sounding, with buzzsaw synths and interesting change-ups. This one in particular goes from a more standard (but harsh) ravey melody, to a sort of brutal atonal pattern that sounds way harsher to me than most 92 stuff of the time… almost more in-line with some dark PCP type thing. Definitely NOT for everyone, but a cool track for those into darker more “out there” hardcore stuff.

Oh yeah, normally I try not to mess with the sound of posted tunes, but I’ve applied some compression to this one since the dynamics always felt a bit off to me…certain parts sounding way louder than others. Hope it doesn’t ruin it for anyone, but it definitely makes it a bit of a smoother listen for me. 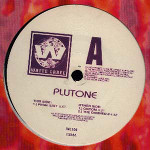 2 Replies to “Plutone – The Damned II”