Here’s a favorite of mine (aren’t they all?), on the Parliament Label which was Rob Haigh from Omni Trio’s label, and a sublabel of his in-house label, Parliament Music. According to Discogs, this release is by the crew who did the Skyo and Mak and DBL Productions tunes on the label. On Discogs and RDB, Syko and Mak are listed as Mark Birse (aka DJ Mak), and a guy named Simon McCutcheon. However, I remember chatting with Si 2 Bad (aka Simon Colebrook) at Bangface Weekender this year, and he mentioned this record was something he was involved in. So, I’m not quite sure what’s up, maybe all three of them were? The “proof” that it’s by McCutcheon and not Colebrook seems to trace back to this comment on youtube:

Simon McCutcheon 6 years ago
If anyone’s looking for original PM (Parliament Music) or Candidate vinyl reply to this message as I have some of the original vinyl still boxed up and never distributed.
Simon AKA Persons Unknown AKA Syko (Syko & Mak)

Producer identifies aside, “Release Yourself” is a cracking tune!! In fact, the whole EP is one of those nice versatile 92-93 EPs that provides great bang-for-the-buck, with four solid tracks each in a different style or mood. It’s as actually hard to pick which tune to post here, with the top two candidates being his one and A2, “Time To Get Raw Pt 2”. “Time to Get Raw” would normally be my top choice, since it features frantic break-work, laser sounds and intense scratching – a bit like a dystopic b-boy alien battle as captured by an amiga! Normally the crazier and more frantic a track is the more I like it. But this one wins out by a hair, just because it has a similar raw feel but the gritty breaks and fx are nicely balanced by catchy vocals and pianos, giving you both sides of the hardcore spectrum in one tune. Definitely one to look for! 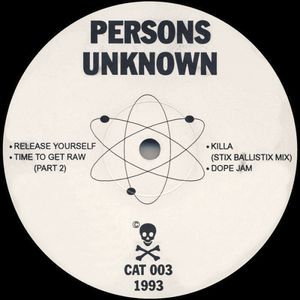