When it comes to various oldskool styles 90-2000, it’s no secret that 1994-97 stuff has been getting a lot more shine these days. It used to be 92 was all the rage, then darkside seemed kind of trendy for a bit, now anything atmospheric / vibey is the one. That’s not to take away from any of these styles, I love them all and especially play a lot more 94-96 since it’s a lot easier to fling in a mix without outlandish key clashes etc. But lately I’ve been missing full on 92-for-the-sake-of 92 stuff. So here’s a few posts in that style. Nothing “Beautifully crafted”, just fun crazy rave-y tracks.

To start, this track is by Nick Power of the famous “Music Power” shop. Nick was an underrated producer who did a ton of good tunes, all of which were on smaller labels (including ones he ran himself). Of those tunes, this is probably one of the most sought after. I never bothered to buy it before since it was always pretty rare and pricey, and I always considered it more than a bit cheddar. But someone recently threw a copy of the later bootleg pressing in with an order I received (Thanks man!), so I gave it a few plays. Sure enough, it’s not a shabby tune. Solid samples, good sound even on the bootleg (ripped here). Really, it comes down to whether that “Cops” themesong bugs you or you think it’s kind of fun. It definitely seems like the sort of thing which might be corny or groan inducing at first, but if you hear it enough in a mix could get stuck in your head easily.

Nick Power has some interesting stuff to say about it on discogs:

This is a track i put together in an updated drum n bass style back in the day. Only 500 pressed to test the water, as i sent this to the producers of the USA TV show “COPS” in the hope that they would use it as a new ‘kooler’ theme tune, and that i would make 6 or 7 pounds. I never received a reply, and the track never got a general release.
I wish i had some left then maybe i could have made 8 pounds now at least.
Teknicks Dex was a tekno track that i put together in 2 mixes. So titled from Take Nick’s Decks. Touch ’em and i’ll kill ya!!

Nuff said!! Check it out below. 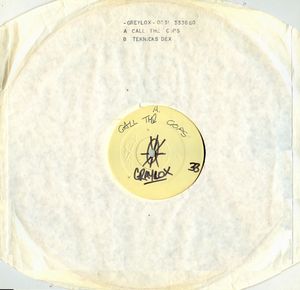 2 Replies to “Greylox – Call the Cops”