After six years of running this site, I’m breaking out of the strictly digital realm and starting a label called 8205 Recordings. The goal of 8205 is to unearth select hardcore/jungle tunes from 1991-1995 that never made it off dubplate or DAT, and press them to vinyl. Each release will be limited to between 100 and 300 copies, aimed at serious oldskool enthusiasts who are still trying to track down those last few elusive tunes from back in the day. 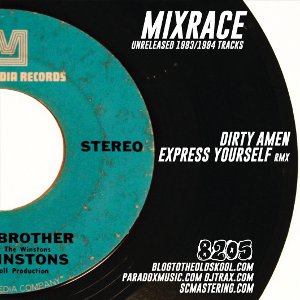 First up: Mixrace – Unreleased 1993/1994 Tracks, featuring two never before released tracks by Mixrace (aka Paradox and DJ Trax). “Dirty Amen” is the deeper of the two tunes, with a sombre female vocal breakdown dropping into classic 93 style amens. On the flip, “Express Yourself RMX” ups the dancefloor ante, combining classic diva vocals with hard hitting stuttered breakbeats. You may have heard me play “Express Yourself” RMX on my radio shows a number of times over the past year, and Trax has been playing “Dirty Amen” to positive response the past few months as well.

Mixrace – Unreleased 1993/1994 Tracks will be released on vinyl limited to 125 copies, and available for order starting in the beginning of May. UK/Europe mailorders will be handled by Simon at Seventh Storey Projects. Big thanks to Simon as well as Will (Sublogic) and Dave (92Retro) who were big influences in my deciding to start this. A select few copies will also be sold by me in the US via this site.

For more information, and to keep up to date with the release, you can add the label’s page here:

https://www.facebook.com/8205Recordings
Full 8205 page on this site coming soon. If anyone wants a more thorough promo blurb / extra info, please hit me up at the contact email to the right.