Here’s a big tune by someone whose done quite a variety of hardcore related releases under a number of names…. starting with a couple EPs on Moving Shadow under the name DVUS, then doing several EPs under the Sakana name as well as DJ Mad Axe and Jimmy Fingers. According to his facebook page here, he was also involved early on/ helped found Kool FM. It’s interesting though because I don’t remember hearing his name being mentioned as a founding member of Kool before, all accounts have heard seemed to say that it was started by Eastman and Smurf? Maybe someone who was around + heavily involved back then can clarify…. Aside from pirate radio stuff, his other EPs at the time are quite cool – DJ Mad Axe – “Fire and Ice” is a great hardcore revamp of Steve Pointdexter “Work that Mutha Fucker”, and his “Midnight Massacre” EP is an excellent underrated darkside EP. If you listen to my radio show regularly you’ve probably heard both of those in the past since they’re personal favs. He’s got quite a few of these classic tunes posted here on Reverb Nation, so definitely check those as well. 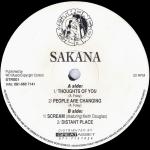