OK, back with this 92-93 whitelabel banger … Iain Clifton is a seriously underrated producer who did three releases on his label “Critical Rhythm” between 92 and 93. Every one of these is an absolute TUNE and worthy of owning. “New Sound By” is probably the best known of the three, but really there are gems on all three.

This title track off the “Cosmic Twist” EP is another one of my favorites, chock full of densely layered hiphop breaks and vocal snippets, plus a vocal from the 80’s hiphop classic Captain Rock “To the Future Shock”. There’s some darker pads and bleeps going along as well, though for me it’s all about the mad break layers and vocal bits. The rest of the EP is similarly good, not exactly razor sharp production-wise but more than making up for it with that raw energy that a lot of the best 92-93 whitelabels share.

Unfortunately, the word is already out on this one so it’s pretty pricey and hard to find. It’s definitely worth keeping a lookout for though, between the 4 tunes on it you won’t be dissapointed! 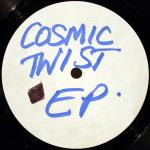 Track removed because it’s been reissued on Blueskin Badger Records