Here’s a dark German jungle tune from 1995 I took a chance on recently. I’ll admit I hadn’t really heard much about this label before getting this – based on the producer’s site and info on discogs, it seems Outlaw Records were based near Mannheim, part of the Milk! Club scene and started around 94 (pretty early for a non-uk jungle label). This tune is quite sparse but solid: chopped amens and dark pads / leads and not much else save a decent breakdown halfway through. Maybe not the most involved track for listening to end-to-end, but I’ve definitely been having fun mixing it, and it’s quite cheap so a solid purchase for the obscurity seekers. Especially given how rinsed darkside and dark jungle is at the moment, it’s always nice to find those tunes which have flown under the radar and not been played as much (or at all). Based on this EP, I’ll definitely be on the lookout for other releases from the label. 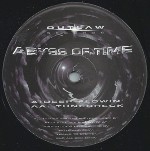