Here’s a personal favorite I meant to play in my set last Friday on Radio Frontline, but I didn’t quite get to it. It’s arguably a well known track (certainly not an obscure white label), getting play at the time in the hardcore scene from people like DR S Gachet, Kenny Ken and Druid amongst others. But it still might have passed by some UK fans radio on initial press, as it was put out on Force Inc (a German label) back in 1992. However, a year later came this remixes EP on Edge Recordings out of the UK (of compnded fame)…problem solved. I’m posting the version off the remixes EP, as I believe the tune is identical and that release seems to be a bit cheaper / more widely available (still hoping some people actually track down records from this site!). Both are worth nabbing though, as the other tracks on the force inc EP are quite cool!

Space Cube consisted of Ian Pooley and Thomas Gerlach, who were heavily involved with the Mainz rave scene back then (according to comments left by a member of that scene in a separate post). From early slower techno singles, through to hardcore and techno, up through some absolutely mental jungle on Riot Beats, these two created some truly excellent tunes. This was probably their biggest tune in the hardcore/jungle scene, next to “Session”, which was played a lot by Easygroove and featured on a similar UK-repressing. Ian Pooley continues to produce quite popular house stuff to this day, I just missed seeing him a few months ago here in the states. There’s also a few EPs of unreleased stuff which came out over the past 5-10 years, which are well worth tracking down.

This tune “Mental Terror” effortlessly fuses early more breakbeat-y hardcore and techno, in a manner somewhat similar to Ron Wells / Basement but with its own feel for sure. Truth be told I wish I knew and owned more stuff like this, as aside from the basement camp, not all that much of it seemed to make it out. If anyone wants to post some more recommendations along these lines, feel free to post a comment below. Until then, check this tune.. definitely one of my favorites! 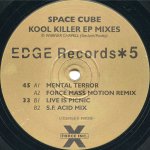