Here’s a fun track I put in my mix for beantownboogiedown last year… despite the fast tempo and presence of breaks, “Digital Fish” is sort of a techno/hardcore/jungle hybrid, “jungle techno” without sounding that similar to Ron Wells/Basement Records stuff (though that’s what I’m most tempted to mix it with). Produced by Nick Power (who I wrote a bit about previously here) “Digital Fish” features a filtered tweaky lead and stompy 4/4 beat made from breakbeats. The changeups aren’t as frantic or abrupt as other hardcore of the time, but they definitely occur with some frequency so it’s fine for listening to on its own as well as being quite fun to mix. The other two tracks on this EP are more standard 92 hardcore, pretty good if nothing too eventful to my ears (though they may be personal favorites for some if they happened to be featured in the right mix back in the day!)

All in all, this is a bit of an underrated jam in my opinion – hardly one of Nick Power’s best known tunes, and certainly not anywhere near as played as “Bach To Basics” (the other Eat Life EP). Cheap and easy to find, well worth nabbing for obscurity seekers. 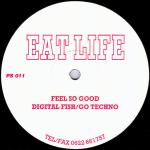